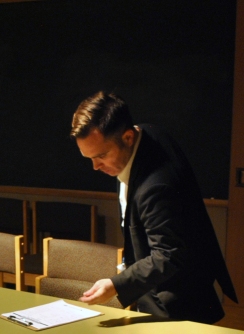 Brief Bio:
Andrew Salyer is a writer, artist, performer, and curator. He has presented research papers at national and international conferences including the College Art Association (CAA), American Society for Theatre Research (ASTR), Performance Studies International (PSi) at Stanford University and University of Calgary, and recently at the International Federation for Theatre Research (IFTR) in Belgrade, Serbia. He works in various media including photography, text, performance, drawing, audio, video, sculpture, and installation. His work has been published by Ugly Duckling Presse and Emmie Magazine, and staged at Hemsley Theatre. He has performed at the Madison Museum of Contemporary Art, Chazen Museum of Art, Stanford University, and University of Paris-Sorbonne, and his work has been exhibited at the New York Photo Festival, Darling Foundry, University of Tennessee Downtown Gallery, and the New Media Caucus’ traveling video exhibition. He has curated exhibitions for the Gelsy Verna Project Space, Madison Jewish Artists’ Lab, and Big Car. He is also part of a collaborative art-making team SALYER + SCHAAG; their work was recently selected for Madison Museum of Contemporary Art’s Wisconsin Triennial. He received a B.F.A. from Herron School of Art/Indiana University and an M.F.A from the University of Wisconsin at Madison. He completed his PhD in Art Theory and Practice at UW-Madison in 2019, researching the poetics and politics of falling in contemporary art. His recent PhD curatorial exhibition was a photographically-based project titled, “White Men Falling.” For the exhibition, he also physically performed a catalog of falls based on a practice-as-research model.

Salyer co-founded the Borghesi-Mellon Interdisciplinary Workshop, “Art and Scholarship in Theory and Practice,” with funding from the Center for the Humanities. The series of events, workshops, and conversations with visiting artists (Gregg Bordowitz, Martha Wilson, Tehching Hsieh, and Linda Montano) provided a space to collaboratively produce new conceptual and aesthetic possibilities, with a commitment to inventing experimental possibilities within the praxis of scholarly research, artistic production, and public engagement. The “Theory-Practice Collaboratory” series hosted hands-on, transdisciplinary, practice-based workshops on topics such as “Speech Acts,” “Surface Effects,” and “Queering Digitality.” This three-year workshop experience activated a dialogue about serious topics in a playful way between academics, artists, and the local community. Additionally, as a co-founder of the Madison Performance Philosophy Collective, he co-organized two experimental symposia at the downtown Madison Public Library that programmed performance art, video, installation, and participatory projects alongside lectures, workshops, and spaces for community dialogue.
As a scholar of art theory and practice, and an active artist, his interdisciplinary academic research, art projects, curatorial work, public programming, and teaching experience are formulated as a system that is intellectually and aesthetically curious, self-reflexive, and rigorously considered through critical visual literacy. Research interests include a critical art practice, contemporary art history and theory, curatorial studies, visual culture, performance, and critical race and gender studies – all of which attempts to reveal perceived moments of failure within common codes for language, identity, bodies, and art. He has been particularly concerned with cultivated failure as a practice and a trope in contemporary art, and focused on the art/life intersection that informs much of 20th century performance art and ideas about performativity and gender identity. Art is an idea in search of form, so the work takes physical form in various media including writing, photography, sculpture, installation, performance, drawing, audio, and video. It situates itself within a visual conversation predicated on critical conceptualism, social practice, and institutional critique, all of which tentatively counteract the performance of resolution, and seeks to stimulate and foster critical thinking.
Institutional critique is a major part of his practice, and since 2013, he has been creating a series of conceptual site-specific gestures called “wall interventions.” This body of work seeks to reveal the symbolic and material structures that condition our reception of artwork within exhibition spaces; rather than showing work, he shows the walls of the museum/gallery itself. By instigating a conversation about institutional structures in these conceptual gestures, he hope new insights emerge about how certain structures self-consciously perform, what blind-spots may exist when the focus is on the structures themselves, and how spectators perceive these spacial performances depending upon their subject positionality.
His interdisciplinary academic research is concerned with issues of social justice in visual cultures. His dissertation project, White Men Falling: Whiteness, Masculinity, and Failure in Contemporary Performance for the Camera, examines the latent and manifest ideological meanings of white male bodies performing the act of falling in mid-century to contemporary lens-based artworks. In addition to his dissertation chapters intended for an academic audience, this project also included a public exhibition that sought to engage the broader Madison community in a contemporary dialogue about race, gender, and representation. His research focused on visual cultures and performance studies methodologies, critical race studies and gender studies, and curatorial studies and the public humanities. The practice-as-research part of this project included working with dancers, martial artists, interviewing a contemporary French philosopher, and speaking with two researchers in kinesiology (Neuromuscular Coordination Laboratory and Sensory Motor Integration Laboratory).
Other interdisciplinary research interests include social practice art in theory and practice; contemporary public sphere theory, especially how a public dis/engages, views, and constructs itself; and the philosophy of what constitutes an “inside” and “outside.”